This past weekend I joined about 175 other people in an event to raise awareness about climate change. If you’ve read my novel, “Plover Landing,” you know that climate disruption (as some are now calling it) is a topic addressed in it, and it’s a cause near and dear to me.

The event was held in a church near Duluth’s Lakewalk – a boardwalk that follows the shore of Lake Superior. Several speakers kicked things off inside the church, and it was interesting to see who the players are, and which politicians are devoted to this issue. It was also fun being with other people who have similar concerns. I’m not sure whether our message will reach from Duluth to the climate summit in Paris, but perhaps this blog will help!

After the talks, we hiked on the Lakewalk, along Lake Superior – one of the largest freshwater lakes in the world, but also one that is showing marked effects of climate change.

During the talks, which were heartfelt and inspiring, I found myself impatient with the lack of factual information in them. Speakers mentioned their observations of changes in behavior in animals and weather but admitted they didn’t know if it was directly due to climate change or not. They admitted knowing scientists they could ask about these things, but apparently, none of them did.

No one mentioned the impacts of climate change on the lake, facts which are readily available from local organizations, and I assume, was the reason the event was held on its shores.

I realized that listening to talks filled with too much emotion and few facts was as frustrating as the last climate event I attended — a talk by the state climatologist (see It’s Climate Change, Stupid!) where there were too many facts and not enough emotion.

Somewhere, there’s got to be a happy medium, but I haven’t heard a local speaker yet who is able to mix climate change facts and emotion in a compelling way. That needs to be done for this issue to reach the widest range of people, and to have an effect. And don’t you start looking at me (Smirk). Seriously, I’m a better writer than talker, and my way of contributing to the issue is through my novel (and this blog).

One of the best heart-twisting climate change stories I heard was from a bird biologist and author. She said that in her talks, she doesn’t even mention the term climate change, but she describes how winter thaws, which are becoming more frequent, can kill baby birds. 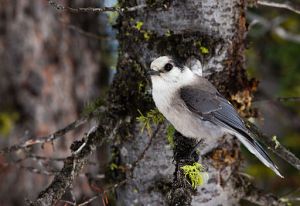 Image of a gray jay by Zachaysan (Own work) [CC0], via Wikimedia Commons.

The species in question is the gray jay. These curious birds are a cousin of the blue jay, but don’t have the pointy head or the bright plumage. I’ve often seen them deep in the woods, where, with whisper-quiet wings, they like to follow hikers and campers. The biologist said that the birds hide small pieces of meat or berries under the bark of trees in winter as food caches for their babies, which hatch in late winter.

If there’s a mid-winter thaw, the food spoils. The parents can’t tell if it’s spoiled though, and when their babies hatch, they feed them the rotten food and the chicks die. The biologist teared up as she described it, and I almost stated bawling right during her talk, too. But then, I’m a bird person. Although we humans may rejoice in a winter thaw, such unusual events can mess up other species.

Not to dismiss the efforts and emotions of the people at my local climate event, but I came away from it thinking that we need more stories like the one about the gray jays – stories from people who know their facts but aren’t afraid to add emotions to them.