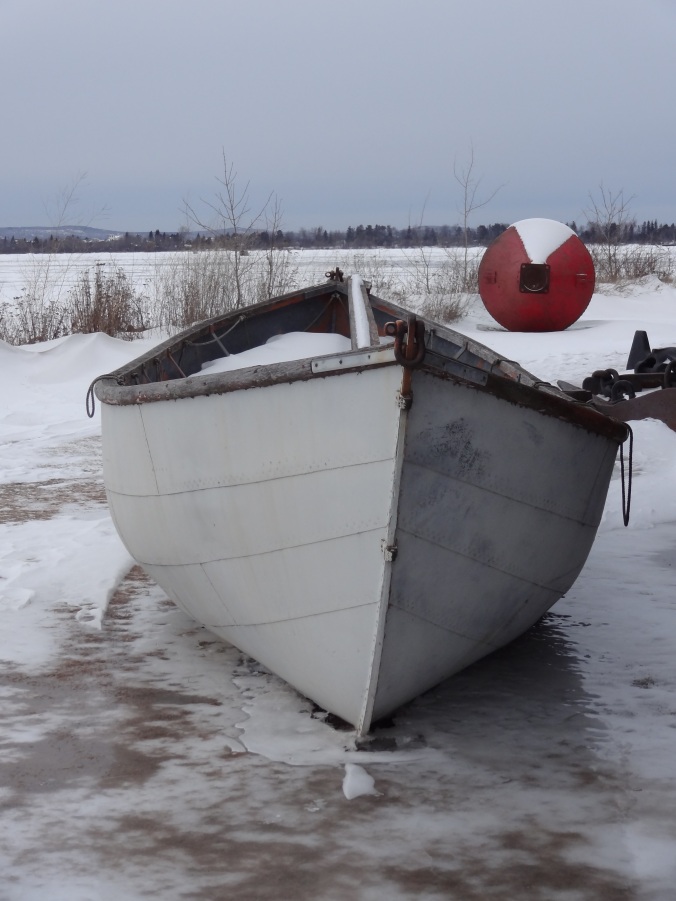 I’m a northern Minnesotan. I was born here and have chosen to live here. On purpose. Despite weather like we’ve been having of late, with 30-below windchills.

I have a large dog who needs frequent walks or he will find creative ways to get into trouble. So I get out more than most and like to think of myself as fairly well acclimatized. We often walk in the forest by my house or along the shores of Lake Superior.

Today was a shore day. As soon as we stepped outside, the cold enveloped us; its fingers reaching between the threads of clothing, touching thighs, invading noses and ears, causing eyes to tear not from sadness but as a simple physical reaction to sub-zero temperatures.

With his wooly coat, my dog is not as affected by cold as am I, except for his feet, which get super-cooled by salt crystals spread on the road to melt snow for cars. The cold doesn’t strike until he is off the road and back into the snow. He gingerly picks up his feet, begging me to wipe off the snow and salt layer so he can continue our walk in comfort.

I oblige and he trots off along the shore, sticking his nose into snowdrifts and romping with abandon. I wish I felt so free in the cold. For a human, to disrobe at these temperatures would mean inviting death. Not right away, but surely in an hour, maybe two if one sports a seal-like layer of fat.

The cold defines our movements. Northern Minnesotans walk with shoulders hunched and hands in pockets, limiting our time outside to the bare minimum for the task at hand. Cars hibernate in driveways, with oil congealed like coagulated blood. For those whose cars survive, travels are confined to the necessary: groceries to get through the next few days, gas for the car, meetings that can’t be avoided. Even crimes decrease.

Living in this cold is like living in a giant cage. We have no one to blame but ourselves. If we hated it enough, we would move. We have free will. Maybe not always enough money, but if a person dislikes something enough they will find a way to change it. We’ve all heard of people who couldn’t take it and moved elsewhere after only one winter or part of a winter. We may complain, but not too much, because we expect the cold. Maybe, we’re even a bit proud of it.

The cold is our cage and we learn to live within it, or we escape. Some take trips to warmer climes. February is my favorite time. It’s usually the coldest month, and the change seems supremely decadent. Others wait for spring.

Spring brings with it a gradual yet overwhelming sense of freedom. With the warmer temperatures and budding greenery, we can go outside without worrying about frostbite or death. We can disrobe as much as modesty and civilization permit. Our senses are overloaded with smells of plants long dormant. Spring fever is altogether real here for good reason.

But for now, we live in the cage. Besides dressing in layers, one trick to survival is not to let your mind be confined. It’s all right to slow down during this season, but keeping creativity alive can prevent emotions from congealing like car oil and sending you in a downward spiral. Starting this blog is my answer to that.

Read a book. Heck, write a book. Help others. Watch a dog run in the snow. Whatever you do, keep moving and keep creating. Spring will come soon enough. But until then, we need to make our own seasons of the mind.

7 thoughts on “Cold as a Cage”