I’m going to meander up the North Shore of Lake Superior to Grand Marias, Minnesota, this November. I’ve been asked to give a reading as part of a panel of local writers during a lunch session of the North Shore Readers and Writers Festival on November 9.

I’ll be reading an excerpt of my Lake Superior-inspired story from the “Going Coastal” anthology along with two of my favorite local writers: Felicia Schneiderhan (“Newlyweds Afloat”), and Eric Chandler (“Hugging This Rock: Poems of Earth & Sky, Love & War”).

Best of all, this is a free event! You can bring your own lunch and attend at no cost, but you do need to register through the festival website. There are also options to buy lunch.

The festival looks like an awesome way to meet published authors and learn from them. Check out the course schedule and see if anything strikes your fancy. All the classes are available ala carte, so that keeps costs down.

An anthology of Lake Superior short stories that contains one of my tales was awarded an honorable mention in the fiction category of the Northeastern Minnesota Book Awards competition. “Going Coastal” contains stories written by nine writers who live around the lake in Minnesota and Wisconsin.

Here’s what the awards committee had to say about the book:

The stories in Going Coastal are all deeply personal, and reflect the lake as a source of beginnings and endings-a source of inspiration, loss, and renewal. The anthology contains a variety of very different stories, touching us in many ways, and connecting us to the power of Lake Superior.

The award was established to recognize books that substantially represent northeastern Minnesota in the areas of history, culture, heritage, or lifestyle. For a list of other winning books for 2018, check here.

To learn how this book project happened, read this previous blog post.

I’ve been working a lot lately to promote a new anthology of Lake Superior short stories, called “Going Coastal.” I’m finding that promoting a book written by a bunch of other authors versus a book written just by myself is a lot more fun. Having others to share in the workload of doing readings and events is well, way less solitary, and I enjoy helping to promote their writing careers.

We just had an event at a new local bookstore this week. A superb description of it can be found in “Ennyman’s Territory,” a local arts and culture blog written by Ed Newman. His story also includes a link to a recent review of the book.

And if you are ever in the Duluth area, stop by our newest independent book store, Zenith Books. If you love to read, you’ll feel right at home there.

If you’re active on Goodreads, a book giveaway is currently open for “Going Coastal.” This book is a collection of short stories about Lake Superior. Authors hail from northeastern Minnesota and northern Wisconsin. (A story by yours truly is included.)

Like the horizon blurs between sky and water, reality and fantasy merge in these tales of human struggle on the edge of one of the world’s largest lakes. Click here to enter the giveaway and the chance to win one of two copies. The giveaway is open until June 24, 2017.

If you don’t win, you can always purchase the book for $12.95 at Fitger’s Bookstore in Duluth and online through North Star Press, Amazon.com, and Barnes and Noble. Sales support Lake Superior Writers. 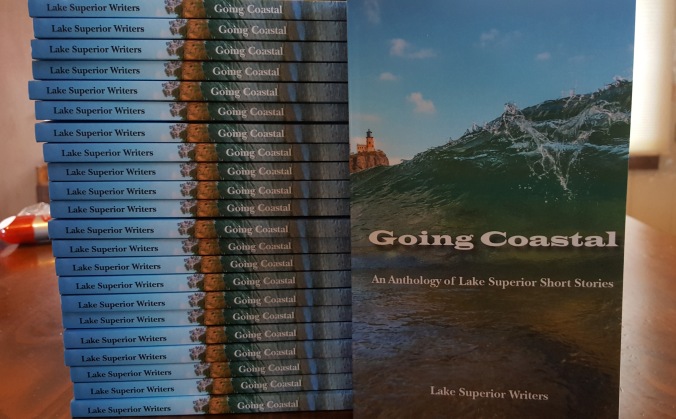 A book project I’ve been working on for about a year-and-a-half is complete! Copies of the book arrived this weekend, so I feel like it’s Christmas even though it’s really Easter.

The book is called “Going Coastal.” It’s an anthology of Lake Superior-inspired short stories written by nine local (northeastern MN and northern WI) authors, including myself. My story, “Water Witch,” is the first short story I’ve ever written, so I feel honored that it’s included.

All of the writers are members of Lake Superior Writers, a local nonprofit group that “supports the artistic development of writers and fosters a vibrant literary arts community.” Proceeds from book sales support this group.

The idea for the anthology started with a conversation I had with the manager of a bookstore in Duluth.  She asked me what I was working on and I told her “short stories.” She said, “You know what customers come in and ask me for? Short stories about Lake Superior. I have to tell them I don’t have any.”

**Bing** Lake Superior Writers has an annual contest. What if we made the contest theme this year about Lake Superior? And what if we were able to find a publisher for the stories? And what if the book could be sold in this bookstore? (And others, of course.)

I’m a board member of the group and brought the idea up at a meeting where we were discussing the contest. The other board members thought it was a great idea, too. And a project was born. After the contest was over and the judges had chosen the winning stories, I started contacting publishers about the project. Several were interested, but I ended up going with North Star Press, the publisher of my novels.

The name of the writing contest was “Going Coastal,” and the board thought that was also a good name for the anthology, and so did the publisher, so it stuck. Then came the need for a cover image. I’m on Facebook probably way more than is healthy for me, and I recalled seeing an image there by a local photographer who often gets into Lake Superior to take his photos. His stunning photo showed the iconic Split Rock Lighthouse seemingly swamped by a large Lake Superior wave. Perfect!

I worked with the authors to edit their stories, and then needed to decide how to organize them in the anthology. I offered the other board members the opportunity to help with this task (which was new to me) but they said I could have the “honor.”

Shoot – how was I ever going to decide? Well, a couple of the stories had Native American themes in them. Some were more mystical than others. A couple focused on ships. A couple others were about rocks. One was about a lighthouse. Another was about a family drama and had a super strong ending. Some stories were short, others were long.

I finally decided to organize them along themes, but I also kept story length in mind and tried to switch that up for variety. Figuring out the story order was as much an art as writing one of the stories itself, and was a fun exercise. I hope it worked.

If you like lighthouses, ships, beaches, ghosts, road trips, history, storms, agates, islands, family drama, and the mystical power of Lake Superior, you’ll enjoy this book.  It costs $12.95 and is available from North Star Press, but also Barnes and Noble and Amazon, which have it as an e-book, too. Take a read!

We’re having a book launch sponsored by The Bookstore at Fitger’s on Sat., April 29 from 4-6 p.m. in the August Fitger Room on the third floor of Fitger’s Mall (600 E. Superior St., Duluth). There will be free appetizers from The Boat Club Restaurant and a cash bar. Each author (except for one who can’t make it) will read from their story.

Come on out and keep that Christmas spirit going through April!

If you’ve ever written a short story (6,500 words or less) about Lake Superior or you’d like to write a short story set in or around it, this is your chance to have it published. Instead of cash prizes this year, the writing group I belong to is offering the chance to be published in an anthology.

Authors can submit up to two stories. The deadline is April Fool’s Day, 2016. Don’t be a fool! Let’s all go coastal and then write about it. See the rules here.