I grew up with a black cat named Inky. She was a stray a neighbor boy brought to us because he knew we recently lost a cat. That previous cat was a calico we named Muffin. Alas, Muffin ran away when we were on a camping trip while she was under the care of a neighbor. Perhaps because of that, we took Inky along on all our camping trips.

She did not enjoy car rides – she would disappear under the driver’s seat and not emerge until we’d reached our destination – but she liked being outdoors in the campgrounds where we stayed. We’d leash her to a picnic table so we wouldn’t lose her.

One place we liked to stay for extended periods was Star Lake, a Methodist Church Campground in northern Minnesota. Because we’d stayed there several times and we didn’t need to travel the next day, we’d let Inky off her leash to come and go as she pleased, like she did at home.

We owned an old Grumman aluminum canoe that I used to paddle around the lake. One day, I got the idea of bringing Inky along. 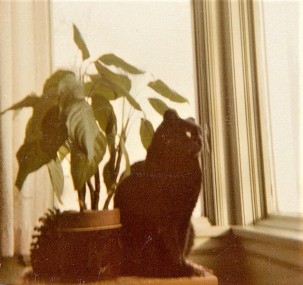 She seemed to like the canoe ride better than a car ride. She perched on the gunwale a few feet in front of me, leaning out over the water.

With each canoe outing, she’d lean farther and farther over the side. It seemed like she wanted to go into the water. One day, I tipped the canoe slightly, giving her some “help.”

Plop! Into the water she went.

We weren’t far from the shore of our campsite – only about 30 feet — and she swam in that direction. I can’t recall if she meowed as she swam, or if she swam silently. (My memory has fuzzed during the four decades since this occurred.) She made it to shore just fine and seemed no worse for wear.

The next time I took Inky out for a canoe, as we neared our site again, she jumped out of the canoe by herself!

Could it be, she liked to swim? I’d never heard of a cat who liked to swim, but apparently, I had one. By the end of our stay, her swims from the canoe to our campsite were a regular thing.

Inky the swimming black cat lived to a ripe old age, despite getting hit by a car once, breaking her leg. I’ve had other cats since then, but none who liked to swim like she did.

I just researched swimming cats. Although most cats would rather avoid water, some do like it. (Read stories here.)

My youngest son is allergic to cats, so I have since switched to dogs. But in my home, I keep this photo my mother took of Inky and me canoeing. I think of my swimming cat whenever I pass it.

Star Lake was the only place I ever took her canoeing. I wonder what she would have thought of the Boundary Waters Canoe Area Wilderness? I bet Inky would have liked it.

10 thoughts on “The Cat Who Liked to Swim”