Porphyry is a wilderness island in Lake Superior on the east side of the Black Bay Peninsula near Thunder Bay in Ontario, Canada. Most arrive by motorboat, sailboat, kayak or canoe, docking in a secluded cove about a mile away from the lighthouse. Some arrive by helicopter, alighting on the helipad adjacent to the lighthouse.

Us? We arrived by dinghy, rowing from our anchorage farther down the island. When we landed, we were met by a native Canadian lad – a volunteer for the Canadian Lighthouses of Lake Superior organization.

Did you know there’s a universal symbol for taking a sauna? We didn’t until now, either!

When he asked where we traveled from, Captain Dave told him we rowed from Isle Royale — a preposterous 29 miles away. The lad did not take the bait, and instead, graciously offered us a tour of new structures in the cove. A boathouse features a mini-gift shop, and the sauna offers promises of warmth to be dashed by a splash in Lake Superior afterward.

Although bikes were available, we chose to stretch our sailboat- and dinghy-cramped legs by walking the flat trail to the lighthouse. Lined with Canada dogwoods, forget-me-nots, and the mysterious devil’s club plant (readers of my novel “Eye of the Wolf’ will know what this is!), the trail passed two points of interest along the way.

One was a small graveyard. Four white crosses mark where members of a former lighthouse keeper’s family are buried. The second is an area where a couple of junker cars lie moldering, relics from when the trail used to be a road. 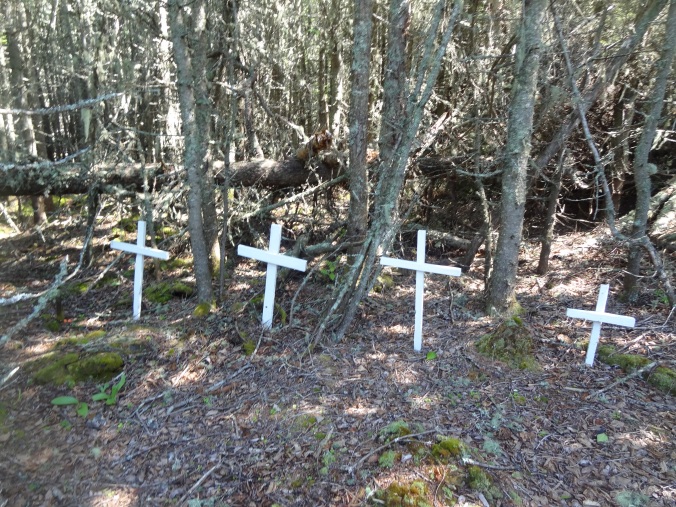 Upon reaching the lighthouse, we were greeted by several more volunteers, plus Eve, a former assistant lighthouse keeper. Her husband, Graham, was the last to keep the light before it became automated. He died a couple of years ago, and a photo gallery has been set up near the lighthouse to showcase his award-winning photos.

Volunteer Kaitlyn showed us the gallery and a small museum. She was walking us toward the lighthouse for a tour when the door of the structure groaned and burst open. A man ran out, cell phone plastered to his ear, talking intently.

After all the wilderness silence we’d experienced, this was shocking. Not only for the noise but for the technology. (We hadn’t had cell phone service in a while.) We all put our hands on our hearts, and stopped on our tracks.

The man continued walking away from us, talking on his phone. After recovering, Kaitlyn and Eve told us the man was Paul, who ran the place. Once he got off his phone, we were able to meet him. He explained his office is in a room in the base of the lighthouse. He did not explain why he had to suddenly run out of it, but one would assume it was because he was in an important conversation and needed better reception. It made me wonder if his heart-attack-inducing bursting forth happened often, and also made us feel a bit sorry that running the place has him so stressed that he can’t meld into the peacefulness of it. 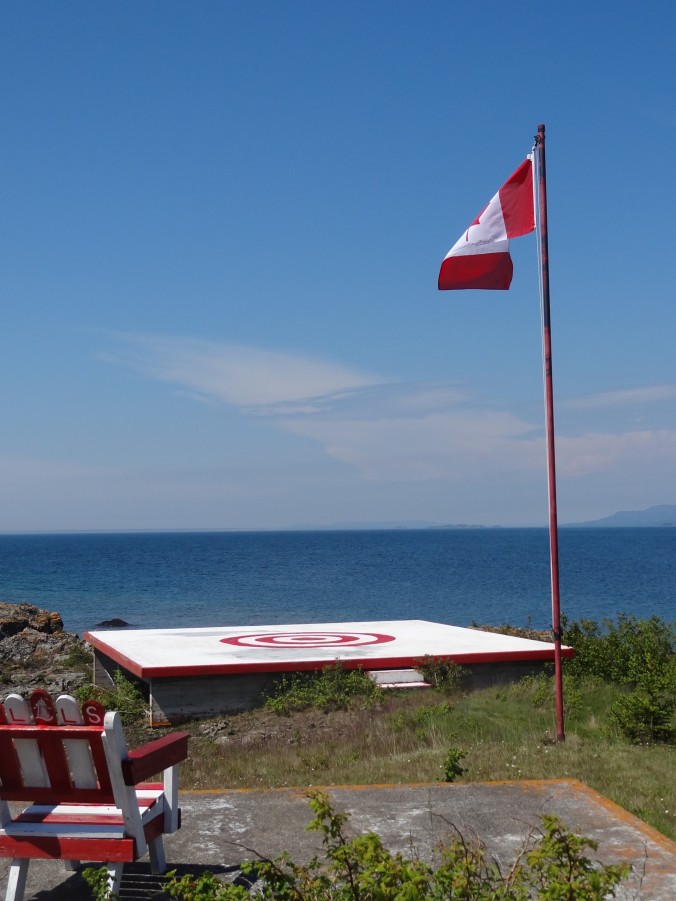 The helipad at the lighthouse.

As we were speaking with Paul, an older woman laden with painting supplies walked by. She was the latest artist-in-residence at the lighthouse, a painter from Jerusalem. The lighthouse organization sponsors several artists each summer. There’s also a guest house that people can rent, which used to be the lighthouse keeper’s quarters.

After we promised to donate to the lighthouse organization, Paul deemed us worthy of a tour of the lighthouse. Eve and Kaitlyn guided us up the six steep sets of stairs, which were more like ladders. Once at the top, we admired the view of Thunder Bay’s Sleeping Giant through the windows.

After a bit, Eve asked us if we’d like to go outside on the railing. Without hesitation, we said yes. We ducked through a small opening, out into the freedom of the summer breeze. The view was stunning. Eve pointed out the other islands we could see where she had worked with her husband, and where her sons were born. She told us that when they worked at Prophyry, her sons used to enjoy dropping water balloons down the inner corridor. I could totally see how that would appeal to them.

The view looking down from the top of the lighthouse.

After drinking in the view, we carefully descended the steps back to the ground. Eve, at 70, navigated them like a much younger woman. Then again, she must have had a lot of practice when she worked here.

We walked back to the cove and socialized with a Canadian sailor who was anchored there. As we rowed back to our boat, a fog started to roll in, relegating the lighthouse and its inhabitants back into the mists of time. 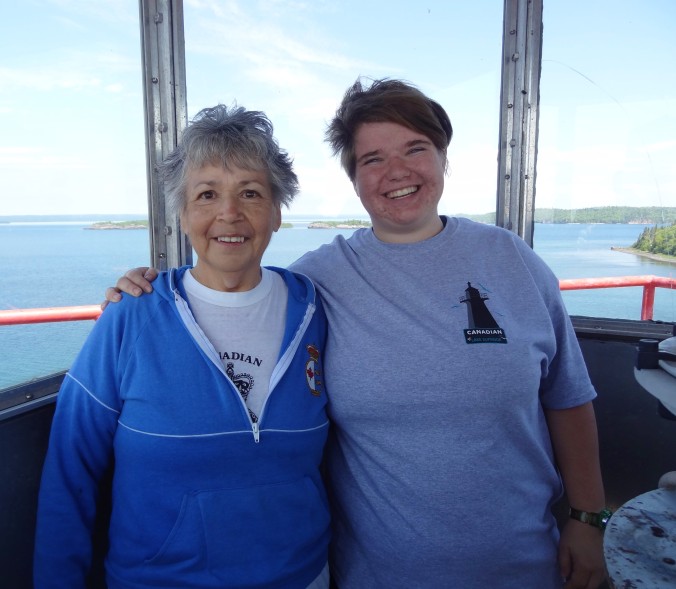