I was rummaging through old files the other day and found the first book I ever wrote: “The First Book of Pig People.” As the name suggests, it led to sequels: “The Adventures of Janet and Harry,” “The Adventures of Sally and Fred,” and “Jace.”

I wrote and fully illustrated the books one summer when I was age eight or ten, which was in the early 1970s — as you can see from the platform shoes and clothing styles in the cover photo. I worked on them with my girlfriend Karen, who wrote her own books. We’d bring our stories to each other’s houses and sit at the kitchen table, scribbling away with our pencils. I also remember writing while lying in the grass in Karen’s back yard.

As you can see from the cover photo, the characters are human with pig noses. Why the mix of human and pig? Perhaps it had something to do with my connection to animals. It might also do with a poster one of my brothers had up in his room. As I can recall, it featured a humanoid pig creature littering, and it contained an anti-littering slogan. But, as with most story ideas, who really knows what strange subconscious depths it came from?

Upon finding these early efforts again, I was impressed that I knew I would have sequels from the beginning. Not bad planning for a youngster.

The main characters in the series are two women and four men, because each woman ended up having two boyfriends, mainly due to the lameness of their initial boyfriends. Four pets were also involved: a parrot, a cat, a dog, and a walrus-bird hybrid I dubbed a “walbirus.” With that particular pet, I decided to combine two of the most improbable animals I could. The walbirus also sports a pig nose, it has the head of a walrus, a small walrus body, and wings. Yes, it can fly! Like the humans, the pets also sport pig noses, and the spots on the dog’s coat each contain two piggy nostril markings within them.

The pets drive the story. A cat tells his man (Karl) to let him outside. While on his walk, the cat meets a dog. The cat invites the dog to his house to meet Karl.

Of course, the pets can talk. Hmm, what other stories have animals that talk? Oh, there was that novel I wrote when I grew up called “Eye of the Wolf,” which features talking wolves. Seems to be a common theme here.

The dog then invites the cat and Karl over to his house. The dog’s human is a woman (Janet), and at the sight of her, Karl “knew they were going to be good friends.” Romance blossoms, thanks to their pets.

Later, the cat and dog go on a walk and meet a parrot who lives in their neighborhood. At first, the cat wants to eat the parrot, but the parrot talks him out of it, because he’s “too young to die.” In the way of stories written by children, that makes immediate sense to the cat, who befriends him instead.

Intrigue, romance, jealousy, talking animals . . . what a great combination for a story! I won’t bore you with the rest of the intricate details, but in the end, the women have a brawl over the men and each woman ends up married. Karl walks around for most of the story with a pillow strapped to his behind from all the kicking-out by angry women. It’s so bad, he hires a bodyguard to protect him.

When the bodyguard asks Karl why he needs his help, Karl says, “I have two girlfriends. They found out that I found out that they found out I was in love with both of them. So they fight me. And I’m too young to die.” The bodyguard (Jace) agrees and everything is all right. Jace eventually gets his own story at the end of the series. (The walbirus is Jace’s pet.)

Hmmm, Karl was the name of the bad guy who gets into a fight in “Eye of the Wolf,” too. I honestly did not make that connection until just now. I wonder what I have against men with that name?

The spelling in the stories is creative, “introduchen,” “charicktures,” for characters, “dubble” for double, and “nabors” for neighbors.

In the sequels, the pets, while still integral to the plot, take more of a back seat. As in the first book, most of the sequels end with marriages. Gee, my novel “Plover Landing,” ends with a marriage. Hmm, I detect another commonality. I’m sure other similarities exist as well. If I were a major literary figure instead of just a world famous blogger (ahem), a psychologist delving into my genius would have a field day with these early stories.

Apparently, my plot ideas haven’t changed much from the beginning. But I hope my spelling has at least improved. 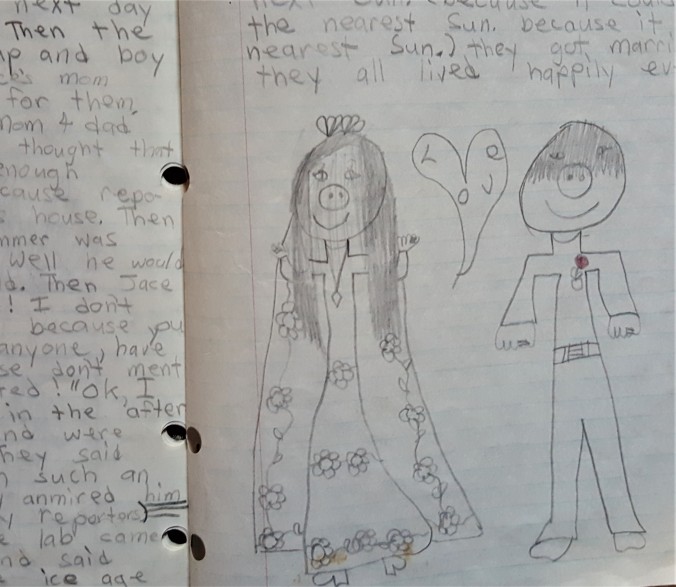 Jace’s wedding at the end of the series.

2 thoughts on “My First Book of Pig People”