People keep asking me what I think about the latest efforts to reintroduce wolves on Isle Royale National Park. I suspect their questioning has something to do with the novel I wrote about the topic. (Do ya think?!)

Well, my novel “Eye of the Wolf” was more about the wolves saving themselves than human efforts to save them. But I wrote it because of my interest in the wolves’ real-life plight: the packs on the island were dying out due to long-term inbreeding and disease. This continued until only two wolves, a male and a female father/daughter combo were left.

My past blog posts about the wolves may have also spurred peoples’ questions. So I suppose I should share my thoughts.

I haven’t done so sooner because my interests have moved on to other endangered animals in the region. Nevertheless, I have been following the wolf reintroduction effort just for old time’s sake, and to see how the real story plays out.

I wish the National Park Service had waited to reintroduce new wolves until the two resident wolves lived out their lives. My fear is that the new, younger wolves will rip apart the old ones. It just seems disrespectful, and it could look bad for the park service. I can see the headlines now: Resident Isle Royale Wolves Slaughtered by New Wolves.

This fall the park service released four wolves on the island that were captured nearby in Minnesota. Their genetic rescue plan is to release at least 15 (and up to 25) more in the next three years. I just don’t think the old wolves stand a chance.

When this concern was voiced at one of the public meetings I attended about the reintroduction, the park biologist dismissed it, saying the resident wolves know the best hiding places because they’ve lived on the island longer than the newcomers. Somehow, that answer wasn’t comforting.

My other concern is that the new wolves, which are from the Grand Portage Ojibwe Reservation, will leave the island this winter if an ice bridge forms, thus wasting all the effort and taxpayer expense of transporting them there. Research has shown that transplanted wolves do try to find their way back home once they’re released.

I understand that the park service wanted to restock the island with wolves that are used to hunting moose, but I question whether having the first ones come from an area so close to the island is a good idea. It might have been better to get wolves from farther away, especially for these initial efforts. I fear another headline that reads something like: Reintroduced Wolves Leave Island for Home on Ice Bridge.

I also feel bad for the transplanted wolves. They are basically kidnapped from their packs and home territories, and dropped someplace strange on an island in the middle of Lake Superior. Is keeping wolves on Isle Royale worth that kind of disruption? I don’t know. It just seems kind of extreme.

Drugging wolves is also dangerous – one wolf slated for the reintroduction died in the process. [Update on November 13: one of the transplanted wolves was reported dead, cause unknown.] Is keeping wolves on Isle Royale worth that risk? The park service and the wolf researchers obviously think so.

Let me just say that although I’m supportive of reintroducing wolves to the island, I’m not optimistic things will work out as planned. Life and Mother Nature seem to find ways to mess up the best-laid human plans. 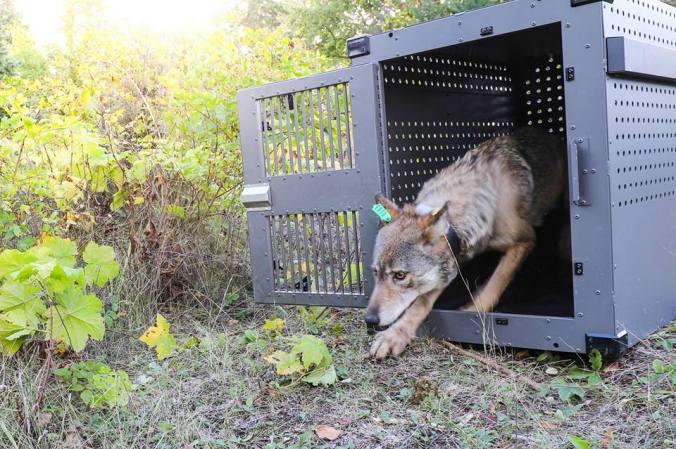 A female wolf — one of the first reintroduced to the island this fall. National Park Service image.

Update: In early February 2019, one of the wolves reintroduced to the island (the female pictured above) walked back home to Grand Portage, Minn., on an ice bridge that formed on Lake Superior during cold weather. I hate to say it, but one of the headlines I feared happening has come true!