One of my favorite local newspaper columnists recently wrote an article that poked a bit of fun at the many alternative forms of yoga that seem to abound. He cited Laughter Yoga as a rather humorous practice, and made up his own Minnesota-inspired yoga names like Labrador Retriever Yoga or Walleye-Jigging Yoga, and Removing Built-Up Ice From Under Your Fenders Yoga. Another recent article appeared in the paper describing Adaptive Yoga for disabled people.

BUT what they’re all missing is Aerial Yoga.

A friend and I had a chance to try it last weekend at The Aviary  in the basement of an historic brick building in Minneapolis. One disclaimer: They don’t only teach Aerial Yoga. They also teach aerial fitness moves. 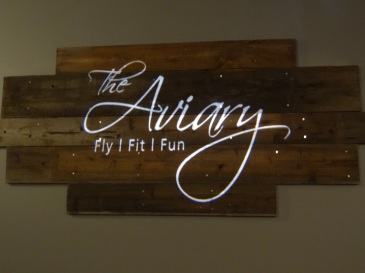 The room was festooned with blue silk sheaths, hung from the ceiling on rotating hooks. The introductory class we attended (you have to take an intro class before you can do a “regular” class) attracted about a dozen people of all shapes, sizes, and genders.

Jane, our instructor and member of the “flight crew,” was ebullient, strong, and fit – but not so unattainably fit as to cause immediate depression upon first glance. She was patient with her instructions, going through each move several times to ensure we all understood.

She first taught us how to sit in the silks, and by doing so, trust that they would hold us. I believe she said they could hold up to 250 pounds. Then she taught us how to do a backbend and grab our feet. I am not quite that flexible, but I did do the backbend part.

Another disclaimer: This class is not for people who cannot tolerate being upside down. And, as my friend discovered, it is not a good idea to eat raw fish and half a bottle of water beforehand. She felt nauseous the whole time after that first backbend.

Jane then led us through a series of other moves, stretches and some strength training. I was reminded how much work it can be just to lift the weight of your own body.

You may recall that I enjoy Hot Yoga. The moves I learned through that were helpful in feeling comfortable with this class, but with all the inversions and wrappings, Aerial Yoga is different – more like flying.

My favorite pose was the diaper wrap straddle back, where you lay back in the silks, and invert by lifting your legs, doing the splits, and then wrapping your legs around the silks for stability (pictured).

We ended class in a bat pose, which found us all hanging upside down like the poses’ namesake.

I would love to try another class. Even my nauseous friend wants to. But our hometown 150 miles away does not offer an Aerial Fitness facility. (Come on, Duluth – get one!) Next time I’m in Minneapolis, I will have to make a point to allow time for it.

I encourage you to try Aerial Yoga if you ever get the chance. Release your inner bird! 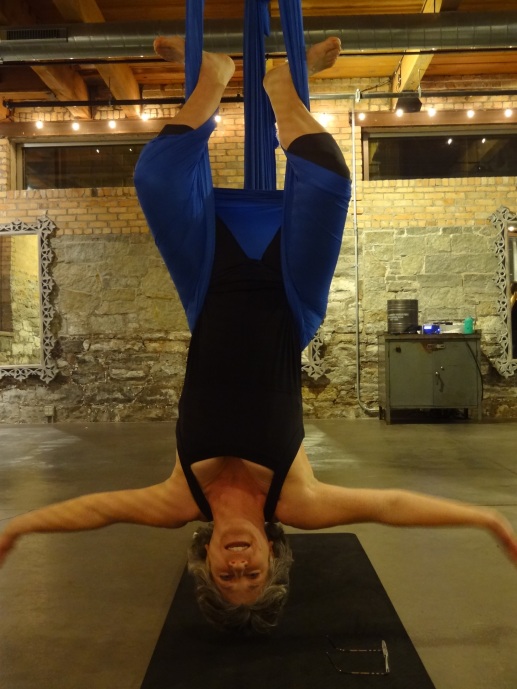 3 thoughts on “Release Your Inner Bird with Aerial Yoga”