My second novel is coming out later this month. I’m happy to unveil the cover for you: 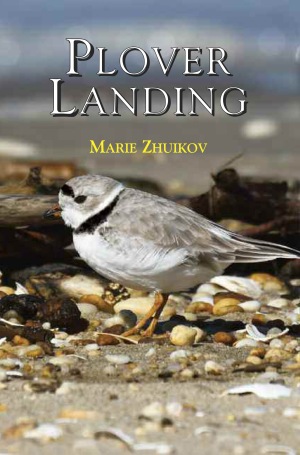 Plover Landing is set in my hometown of Duluth, Minn., in 1995, and it’s a sequel to Eye of the Wolf. Novelists who haven’t been published yet might hate me for what I’m about to admit, but when my publisher suggested a sequel, I wasn’t that enthused. That’s because, between life’s distractions, the first novel took me seventeen years to write, then another couple years to publish.

The thought of doing that all over again was exhausting, although at least I wouldn’t have to spend time looking for a publisher. I was also exhausted from seventeen years of thinking about wolves, which are the animals I focus on in Eye of the Wolf. If I was going to survive a sequel, I needed to focus on a different endangered animal and environmental topic.

It just so happens I was working on a project to restore habitat along the shores of Lake Superior in hopes of encouraging an endangered shorebird to nest. Through that process, I had already learned a lot about piping plovers, so that became the focus of my sequel. Granted, plovers are not as sexy as wolves and they don’t have a handy supernatural being associated with them (like the wolves have werewolves), so I had to ponder how to work the mysticism into it. (But never fear, wolf aficionados, the wolves come into the story at the end.)

My writer’s group joked that I should write about plover zombies, but I did not take them up on that idea. (Smirk) Instead, I researched myths about plovers. While I couldn’t find any local myths, I did find an interesting and sexy Hawaiian myth about plovers, and I discovered a way to use it as the foundation of the story.

Even so, that wasn’t quite supernatural enough, so in addition to the heroine and hero from Eye of the Wolf (Melora St. James and Drew Tamsen), I introduced a new character, a boy named Demetri, who both helps the plovers and focuses readers’ attention on the issue of climate change. I feel strongly that the more integrated that issue is into mainstream media, especially through the use of storytelling, the more people will come to accept it as real.

Because I’d learned ways to encourage myself to write with my first novel, even though I had just as many distractions, Plover Landing only took two-and-a-half years to write. My publisher thinks it’s an even better story than the first and has hinted about the desire for another in the series. I created the ending of Plover Landing with openings for another story or so that it works as a finale. I don’t know. I’ll have to think about that one.

In any case, let the marketing begin! Speaking of which, if any of you are active on Goodreads, I have a giveaway for Plover Landing that’s active until July 15.